This year Interreg celebrates its thirtieth birthday, focusing on three thematic of interest for the European cohesion: youth, a greener Europe and we all have neighbors. In this context, each month, we will interview one of our emblematic projects related to one of these thematic.

This month, we were lucky to have a chat with Estibaliz Díaz, a biology doctor, researcher and coordinator of a fascinating project: SUDOANG - a Sudoe project for the protection of the European eel. 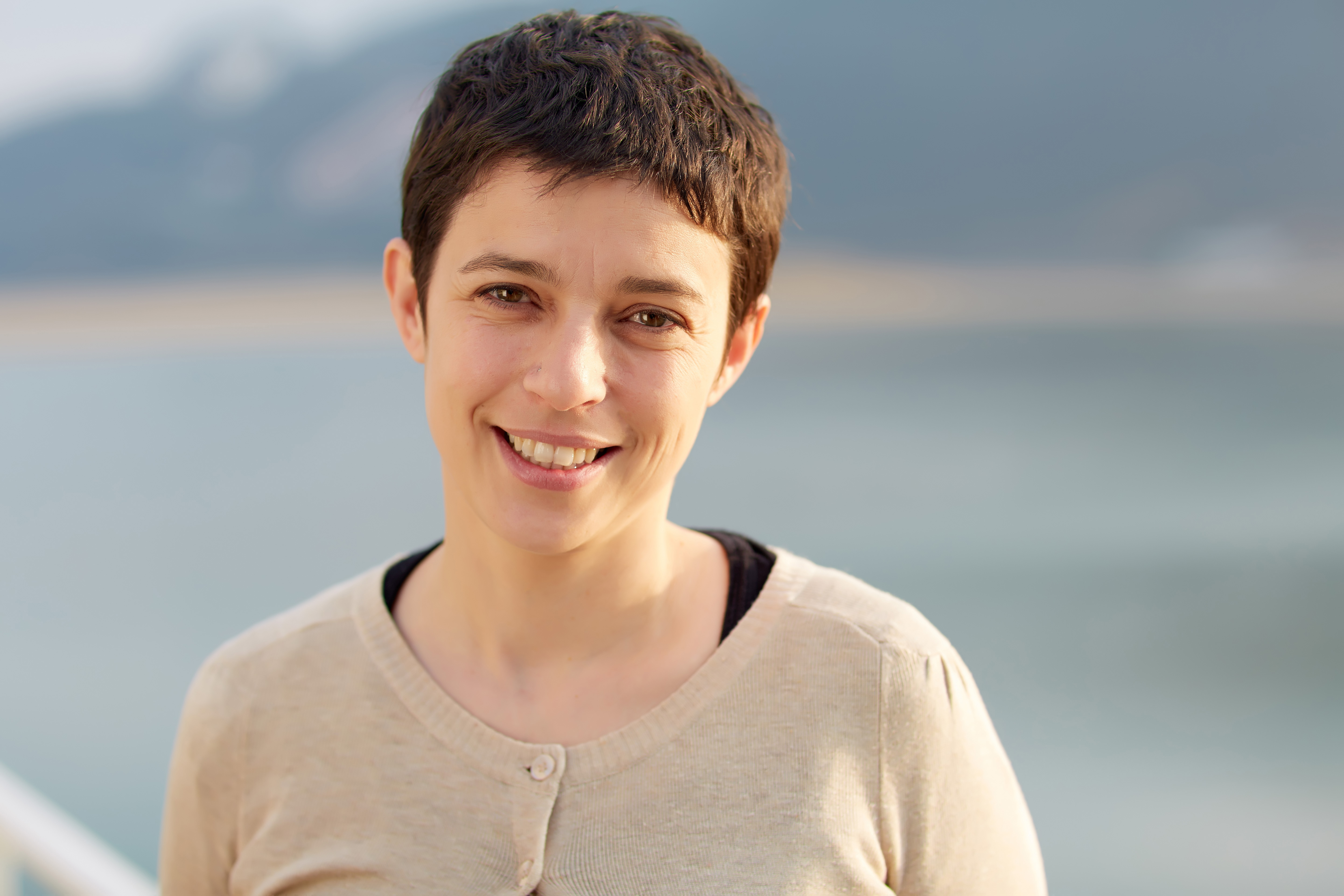 1.    What is the SUDOANG project about?

The situation of the European eel is outside the biological safety limits. The eel population is threatened by climate change, barriers to migration, pollution, development and unsustainable exploitation and trade and illegal fishing. With SUDOANG, we aim at providing the managers of the Sudoe area with tools to improve eels’ management and thus, ensuring the sustainability of their stock.

2. What are the peculiarities of the eel? Why is it important to insure their stock?

From a biological point of view, it is a fascinating species, full of mysteries. The eel is a catadromous species: it spends part of its cycle in the sea where it reproduces and part in the river where it grows. One of the mysteries that surrounds it is that no eel egg has been ever found in the sea or any reproducing adult. It is believed that eels are born in the Sargasso Sea because this is where the smallest larva has been found but we do not really know for sure. Another point is that eels are capable of crossing the entire Atlantic in the form of a larva. Among the eel species, the European eel is the one that makes the longest migration. Like the American eel, it is born in the Sargasso but it has to travel a longer path. Migrations are believed to have started when the continents were glued together and as the continents separated, the eels made longer migrations. Another thing that is unknown is the details of the migration made by the silver eel, the reproductive phase, to return to the Sargasso. Recently, we discovered that eels use magnetic compasses and they use it to orient. This ability would allow them to record the route taken as larvae to return in the silver eel phase to the Sargasso Sea. Regarding the path they follow, some silver eels have been placed on sensors to be able to follow them, but they have only been traced to the Azores. From there, we do not know what happens.

On the other hand, at the socioeconomic level, the eel is of great fishing and trade importance. Depending on the country, there are different traditions of consumption. In the SUDOE zone, all stages of the eel (eel, yellow and silver eel) are consumed. The eel today is very expensive first, because it is scarce and second, because its trade. The Japanese who are large consumers of eel had their own species, the Japanese eel, but in the early 90’s it became scarce. From there, a new business was generated: Chinese fish farmers began to buy eels of different species to fatten them up and sell them to the Japanese. Since they were getting a great return on the purchased eel, they were willing to pay a lot for the eel, so prices skyrocketed, becoming an incentive for fishing. As a result, in 2009 the eel was included in the Appendix II of the International Convention for the Trade of Endangered Species (CITES). The eel is the only European species on that list where we use to find exotic species like the rhino or the pelican. Consequently, international trade in eel was only allowed if it was shown to be sustainable. Since then, the Scientific Review Group has been verifying whether exports from the EU and imports into the EU would have a detrimental effect on the conservation status of the species. In December 2010, the Scientific Review Group concluded that the situation of the eel population was so critical that it was necessary to ban the export and import of European eel and all derived products. . However, due to its high price, trade continued to develop illegally. For this reason, we have incorporated the control forces into the project.

For all these reasons, our project brings actors related to the management of the eel from different levels and sectors together because the eel passes through many habitats:  people from the fishing sector, people linked to the environment, specialists in illegal trade ... we have tried to include all sectors related.

3.    Why did you decide to focus on Southwest Europe?

Conservation of the European eel population can only be achieved with a transnational approach. Although the eel from Spain, France and Portugal constitutes a single stock, its management is carried out at national and regional levels as if they were isolated populations. In addition, the countries of the Sudoe’s area share common aspects. Most recruitment of the European eel (ndrl: number of eels arriving on our coasts) is concentrated in Spain, France and Portugal, and especially in the Bay of Biscay. On the other hand, the EU established a regulation (CE1100 / 2007) to ensure that all Member States develop Eel Management Plans (PGA). However, the eel has shown no signs of recovery after the regulation's implementation. On the other hand, I am part of the eel-working group of the International Council for Exploration of the Sea (ICES) where every year, we make a report and organize ad hoc workshops to advise the European Commission. At the management level, we have observed that each country has its own evaluation methods and these are not comparable. Therefore, SUDOANG intends to provide managers of the Sudoe’s area with joint tools and methods that support the conservation of the European eel and its habitat. For example, French Sudoe researchers have extensive experience in developing population assessment models that they have already used in their PGA. However, in Spain and Portugal, very crude models and extrapolations had been used, so the results are not comparable ... Since the French already had the calculation tools, we will use their method in the rest of the Sudoe’s area.

4.    SUDOANG has a great influence. On one hand, you have influenced the EU's considerations on eel biodiversity and protection and, on the other hand, in the fight against illegal trade carried out by EUROPOL. How did it happen?

Regarding the Commission, our contacts come through ICES. The representatives of France, Spain and Portugal in the ICES eel group are partners of SUDOANG; in fact, it is in this group where SUDOANG was born. One of the tasks of this group is to prepare the scientific council on the species situation for the European Commission, which based on this makes a proposal to the Council of Ministers for them to adopt management decisions. This group is attended by members of DG Mare, so they are aware of the evolution of SUDOANG. On the other hand, the European Commission asked a consultant to verify that the eel management plans were working. Several SUDOANG partners have been contacted to give our opinion on this project, highlighting how SUDOANG can contribute to the implementation of the Anguilla Management Plan by improving coordination in assessment and management methods.

Regarding EUROPOL, Captain Vivas Prada of SEPRONA (Nature Protection Service of the Spanish Civil Guard) contacted me years ago to exchange our knowledge on the eel trade. I helped him by reporting on its bad situation and advising them on the species. When we thought about SUDOANG, we wanted to include people related to the eel traffic control, so through our contact with the Captain we included SEPRONA and its equivalents in France and Portugal. We invited a member of EUROPOL, who has a specific action plan for elvers, to our launch meeting. As a result, more and more control forces became interested in our work, and an INTERPOL representative also attended that meeting. Since then, I have been invited to give a talk to the EUROPOL headquarters in The Hague, to attend an international meeting on environmental crime in Madrid and to teach a course for SEPRONA agents on the biology of the eel and how SUDOANG can support their work in chasing eel traffic. The different project meetings attended by the control forces of the different countries have contributed to foster cooperation between the different countries and sectors of the eel.

5.    Eels are an endangered species. How could we raise awareness among citizens on this issue?

I think it is important for society to know more about both the species and its situation. Due to its appearance (snake shape and the mucus that permeates it), the eel generates many damages; but, as I mentioned before, it is fascinating: it crosses the entire Atlantic in the form of a larva, it survives many traps that we, humans, put into it and it returns to the Sargasso without feeding.

Maybe if people knew how amazing this species is they would love it just a little bit more. I think it is also important to send a message about their situation: in the South, the European eel is at 6% historical recruitment; that is to say, for every 100 eels that arrived in the 1960-1970 period at our coast, only 6 now arrive. Furthermore, the decline of the eel has a very specific impact in the SUDOE’s area. Firstly, due to its role in the food chain, its disappearance would have negative effects on the ecosystems in which it inhabits. Second, employment and lifestyles linked to its fishery are at risk.

6. What are the next steps for SUDOANG?

We have already compiled a large volume of information regarding the abundance of eel, its habitat and the threats it suffers, which has allowed us to make some initial implementations of the model we are developing. We are going to create a web tool with which managers can simulate management measures. Now, together with the actors related to its management, we are deciding what specific measures we are going to simulate, as we cannot include all possible management scenarios. We are also finalizing our governance platform.

7. You highlighted that we are at 6% eel recruitment, a very worrying drop. In your opinion, what does the future hold for the European eel?

The truth is that it is worrying. The European management plan has been very positive because it has put all the Member States to work to conserve the eel. However, the processes are very slow. In 1998, the ICES group alerted to the situation; however, until 2008, we did not have a European management plan. Ten years have passed and the population has not yet recovered. The positive aspect is that it has stopped decreasing. We have to keep trying if we want to preserve this wonderful species.

Protecting biodiversity is one of the key themes for the future of the Sudoe’s area. Discover all our projects in the field here. Moreover, if you want to know more about eels, we are waiting for you on the SUDOANG website. 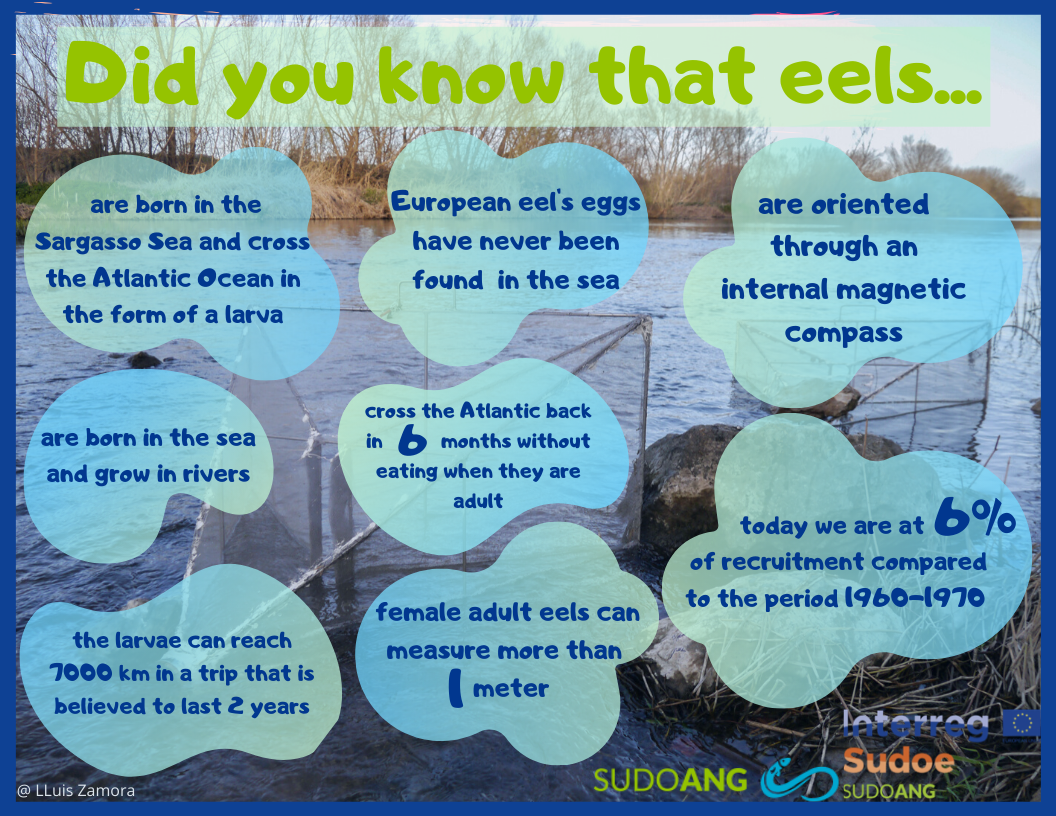